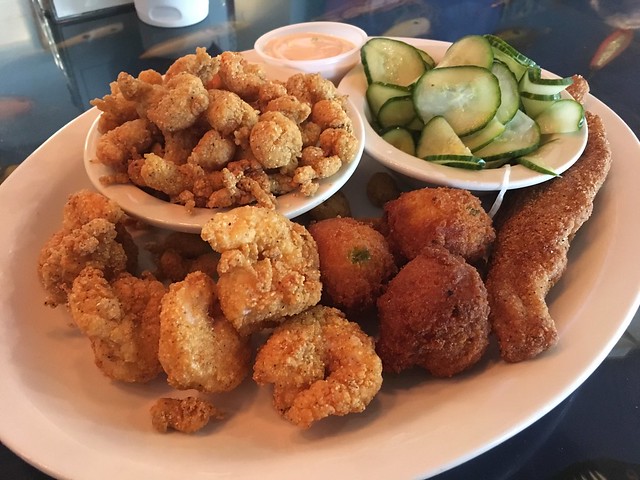 Omg, this was SO much fried food! I liked most of it, but the shrimp and crawfish were kinda dry. The hushpuppies were also kinda greasy. I’m glad I chose the cucumber salad for something more fresh to balance all the fried items. The fried catfish was probably the most decent part of this platter. 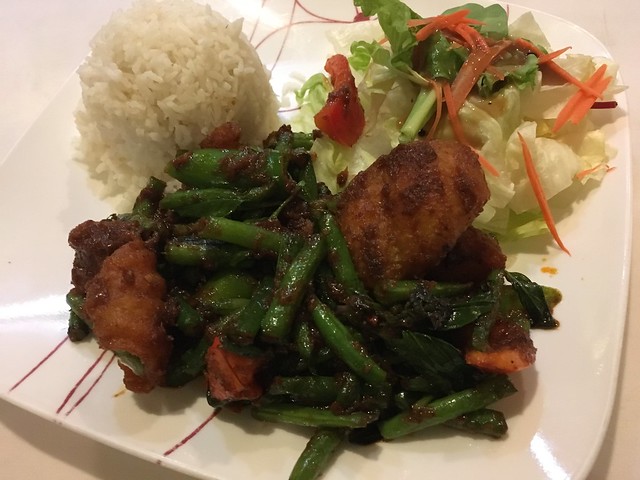 The price has gone up a dollar since last time. I do like this fried catfish though. I wish it was a little more spicy, but I really like the flavors. 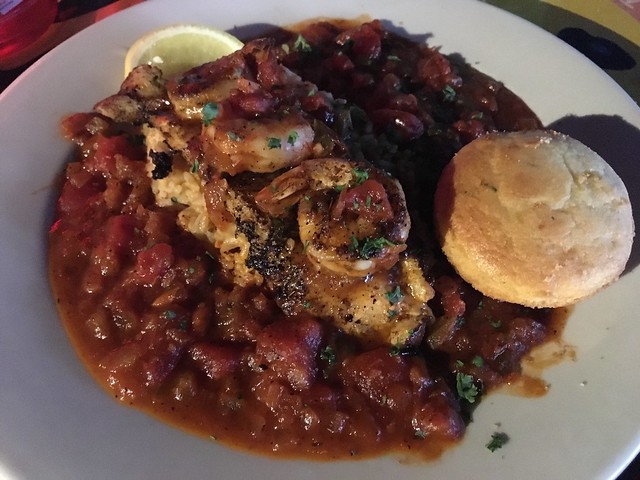 This dish was really flavorful and I liked that the creole sauce had a bit of a kick to it. The catfish, unfortunately, was on the dry side so that was disappointing. We were also seated at a horrible table even though the club wasn’t very full when we arrive and throughout our stay. #fail 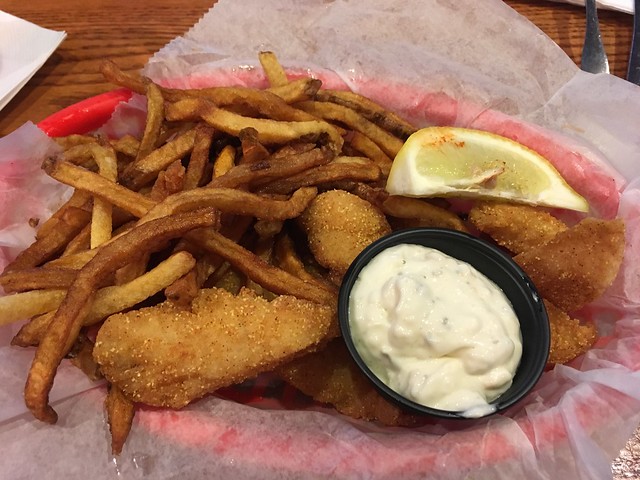 These were small and there weren’t many, but they tasted pretty good. I liked the cornmeal crust. The fries were the soft, limp kind but I actually really liked them. The not most heart healthy plate though, lol! 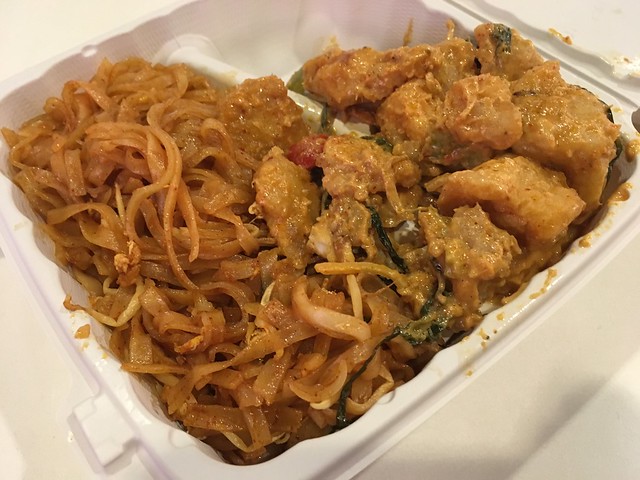 Ugh, I swear that their pad thai gets worse each time I visit! It has become more dry and bland. That catfish was ok, but you it’s harder to mess up fried food covered in sauce. The sauce wasn’t spicy at all though.

I liked most of the items on this plate. The bbq pork ribs were delicious, tender, and the bbq sauce had a nice heat to it. The mac and cheese was oozy-gooey and just the way I like it! The catfish strips were tiny and not properly cleaned (there was a lot of that gross silver crap that gives it a metallic flavor), and the muffin was a dense, dry hockey puck. The beans were fine, and the hush puppy was slightly greasy. I don’t know if I’d go running back when in the Sacramento area because there are other bbq places to try first.

I don’t think I can review this sandwich fairly because I got it to-go and it wilted a little before I was able to eat it. I will say that the catfish was flavorful, but a little greasy.

Oh well for my attempt to order something healthy. These catfish fillets were pan fried in LOTS of butter. They tasted good, but I really wasn’t in the mood for another heavy meal. I can’t pass up mac & cheese though! This version was pretty good!

This was one of the saddest clay pots I’ve had in a while! The three pieces of fish were SUPER small and most of the liquid in the sauce had been cooked down too much making it SUPER salty, yuck! I expected more substance from this dish. Don’t think I’ll be ordering this again!

SO good! The catfish was delicious and perfectly fried – not greasy at all. The jalapeno-peach coleslaw was a pleasant option and you gotta love butter pickles. The sandwich was pretty large but the upper hoagie bun was too thick for me. I wish they could have toasted it a little more.

Housemade bread and butter. I know that the butter was flavored but I forget what it was exactly – it was delicious though!

Daughters of the Confederacy Museum. This historic building sits on the corner of Market Street and Meeting Street at the western end off covered market area. It looks cool from the outside, but I haven’t gone inside yet. I like that you can walk underneath it to enter the market behind it.

Drove down to San Jose today to have brunch with a couple of Silverfox’s friends. I was super excited to go since I never go there and I’d get to try new restaurants, but the place we went to totally bombed. The service was horrific (SO slow) and the food was mediocre. We shopped around Santana Row and Westfield Mall afterward and I was able to buy a few t-shirts so the trip wasn’t a complete bust!

Omg, can’t wait for the Grammy’s tonight! Actually I have to head into work but I’m recording it on DVR. I still am a little in shock that Whitney Houston died yesterday! I know she was a complete mess at the end, but she was SO beautiful and SO talented. What happened to her was an utter tragedy. We watched her sing the national anthem on Youtube a couple times this morning and she was spectacular. She hit every perfect note SO effortlessly and she looked fresh and full of life. I’m saddened by her loss. I told Silverfox that this hits me more than the loss of Michael Jackson (or Heath Ledger actually). I grew up with her songs and enjoyed listening to her amazing voice. She was a bright light in the lives of so many people and she will be missed.

The catfish fillet was really large, but it wasn’t all that good. The crust was a little greasy and it didn’t have a lot of flavor. I had to drown in it Crystal’s hot sauce! The biscuit was also dense and lackluster. It was a disappointment after the cornbread. I liked the macaroni and cheese but it was also very greasy. I know that mac ‘n cheese can sometimes be greasy, but this was out of control. You could see the bread crumb topping just dripping with it, gross!

Cornbread with honey butter. Complimentary. This was one of few yummy items and it was quite large!

This was my absolute favorite dish at The Slanted Door!  I remember ordering this back in the day when the restaurant was still in its small space on Valencia Street.  I loved it then and I still love it today.  It has such a deep, rich flavor and the catfish is so tender and fall-apart flakey.  The sauce is SO amazing with the caramelized onions.  The catfish slices do have a lot of bones in them so be careful!  I’m used to fish bones, and I actually like that they’re there because they add more flavor to the dish.  Beautiful and delicious!!!