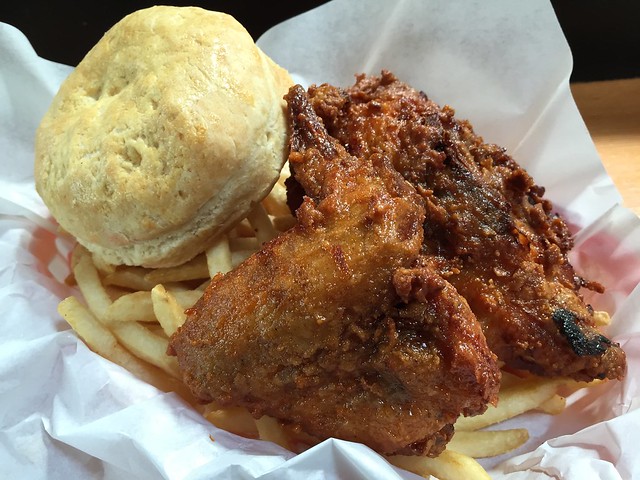 This tasted great, but it was actually really greasy!!! And I didn’t like that – lame. I also thought the French fries AND cream biscuit was just fatty carb overload. I would’ve appreciated another option for sides. 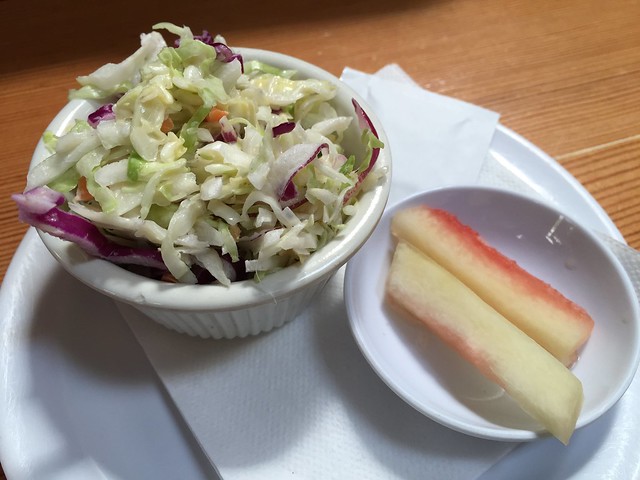 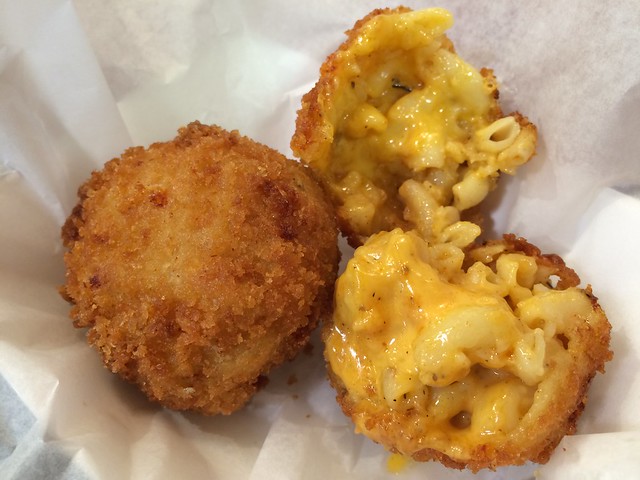 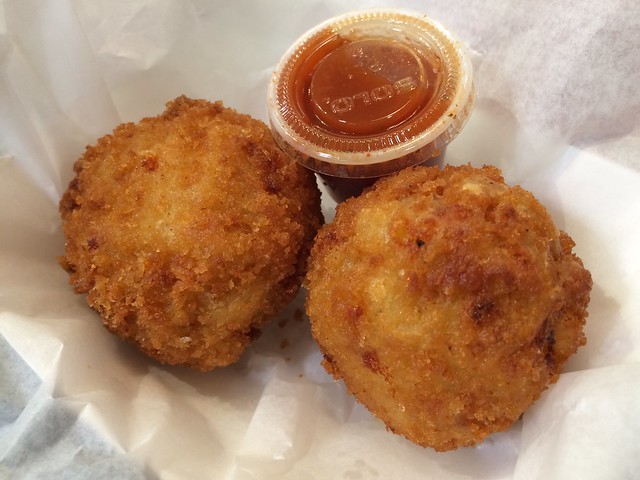 Mmm, these were heaven! I loved them so much. They were perfectly fried and oh so gooey and cheesy inside. NOMS! 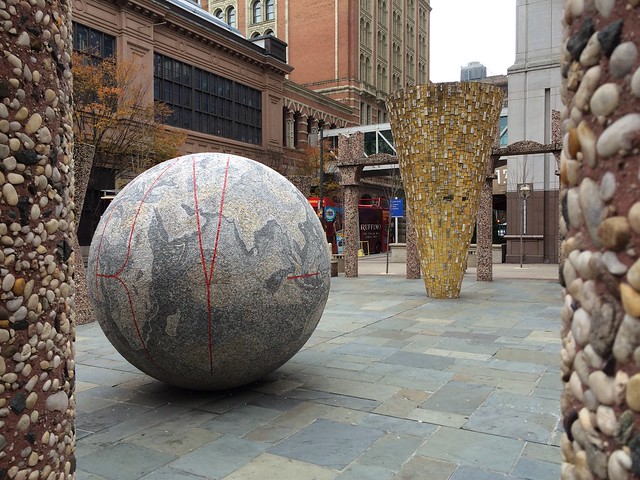 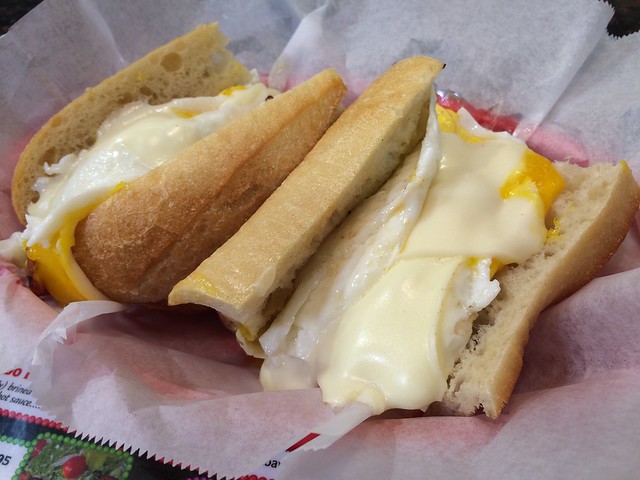 Mmm, this made for pretty good, hearty breakfast. And for under five bucks, you can’t beat that! I loved the runny eggs and the andouille was nice and smokey and flavorful. 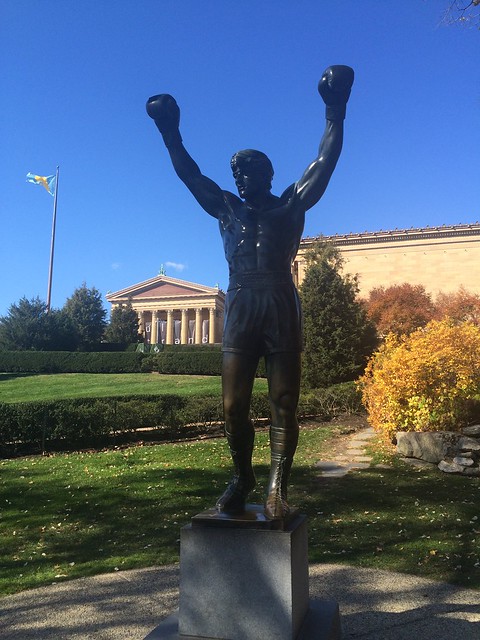 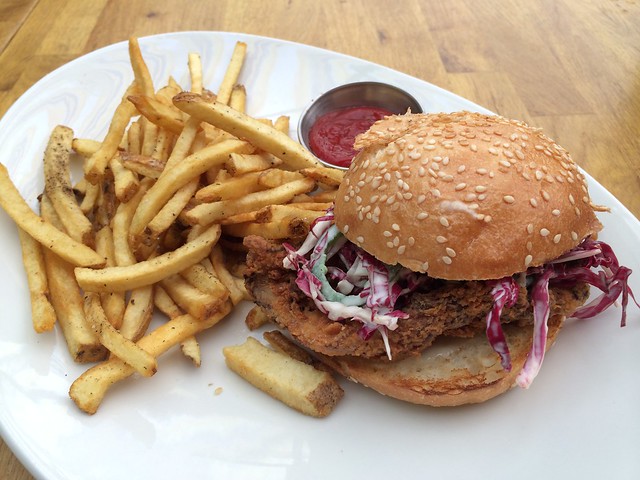 I liked the idea of this po’boy sandwich and I think that it’s a great value, but the chicken was over-fried and dry. Ew! Even the slaw and ketchup couldn’t save it. 😦  At least the fries were good. 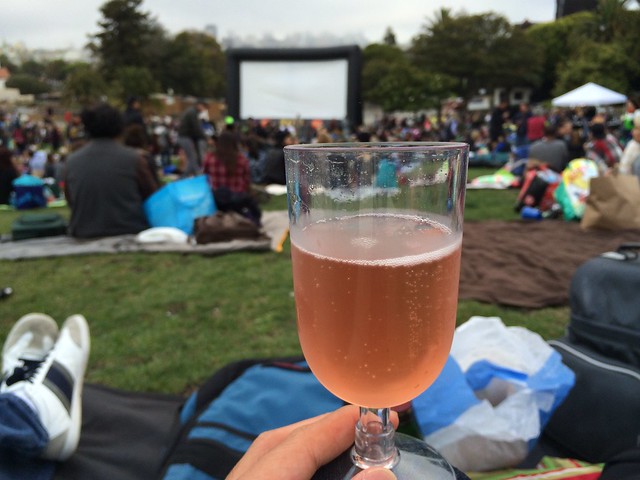 Hmm, this was such a disappoinment! The chicken was way overcooked and the waffle was limp and lifeless! The service was super slow so maybe this was just waiting under the heat lamp so long that it dried out more than it should have.

I could barely cut through some of the chicken pieces because it was SO overcooked! If there was any flavor in this chicken, I couldn’t taste any of it because it was hard as a rock.

I don’t think I can review this sandwich fairly because I got it to-go and it wilted a little before I was able to eat it. I will say that the catfish was flavorful, but a little greasy.

I normally LOVE hush puppies, but these were dense and SUPER greasy, argh! Damn you spiteful gods – I wanted to enjoy these fried, artery-clogging pillows smothered in butter! Instead, I could barely finish one.

Hmm, after hearing so many rave reviews about this place I was sadly disappointed by the quality of their food. The fried chicken were SUPER greasy making them unpleasant to eat. The fries were also soggy and flavorless.

Mmm, this was SO much food for nine bucks! The shrimp were tasty and the sandwich was too large for me to finish, especially with the colesalw and fried okra. I ended up foregoing the bread midway through and just ate the center. I definitely gained a few pounds during this trip!

I also got a side of macaroni and cheese ($2.50) because I can’t deny the little fatty in me, lol! It was delicious!

View of Fort Moultrie from the visitor center, Sullivan’s Island. I took a little tour of this cute fort during a free weekend. It was really cool to learn more about the history of the Charleston area.

I’m not sure if it was the actual corn bread or the honey butter that made these SO good, but they were irresistible! I could have eaten the entire basket all by myself!

United States Custom House, East Bay Street. Construction of this building first started in 1853 and was finally completed in 1879.

Drove down to San Jose today to have brunch with a couple of Silverfox’s friends. I was super excited to go since I never go there and I’d get to try new restaurants, but the place we went to totally bombed. The service was horrific (SO slow) and the food was mediocre. We shopped around Santana Row and Westfield Mall afterward and I was able to buy a few t-shirts so the trip wasn’t a complete bust!

Omg, can’t wait for the Grammy’s tonight! Actually I have to head into work but I’m recording it on DVR. I still am a little in shock that Whitney Houston died yesterday! I know she was a complete mess at the end, but she was SO beautiful and SO talented. What happened to her was an utter tragedy. We watched her sing the national anthem on Youtube a couple times this morning and she was spectacular. She hit every perfect note SO effortlessly and she looked fresh and full of life. I’m saddened by her loss. I told Silverfox that this hits me more than the loss of Michael Jackson (or Heath Ledger actually). I grew up with her songs and enjoyed listening to her amazing voice. She was a bright light in the lives of so many people and she will be missed.

The catfish fillet was really large, but it wasn’t all that good. The crust was a little greasy and it didn’t have a lot of flavor. I had to drown in it Crystal’s hot sauce! The biscuit was also dense and lackluster. It was a disappointment after the cornbread. I liked the macaroni and cheese but it was also very greasy. I know that mac ‘n cheese can sometimes be greasy, but this was out of control. You could see the bread crumb topping just dripping with it, gross!

Cornbread with honey butter. Complimentary. This was one of few yummy items and it was quite large!