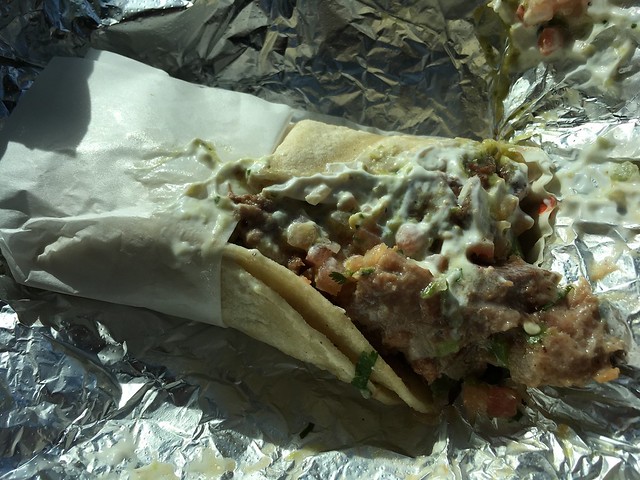 Mmm, this taco was really tasty! And I love their orange sauce, which everyone else loves by the way. They even sell the sauce by the bottle. Yum! 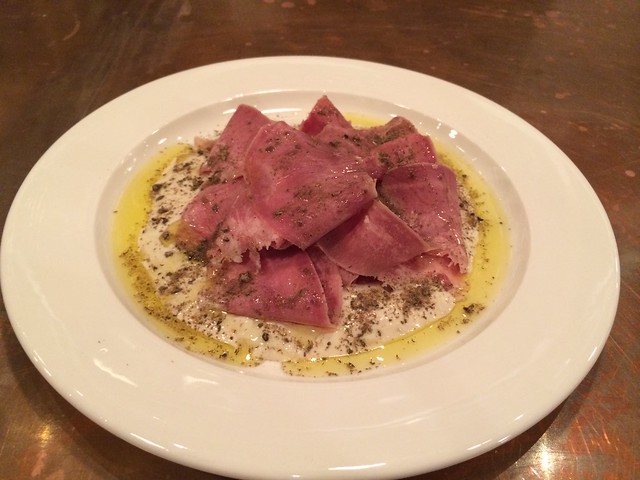 I’ve never had pork tongue before, only beef tongue so this was a nice little treat. The tongue had a great flavor and texture and the tonnato sauce was a delicious accompaniment. Mmm! 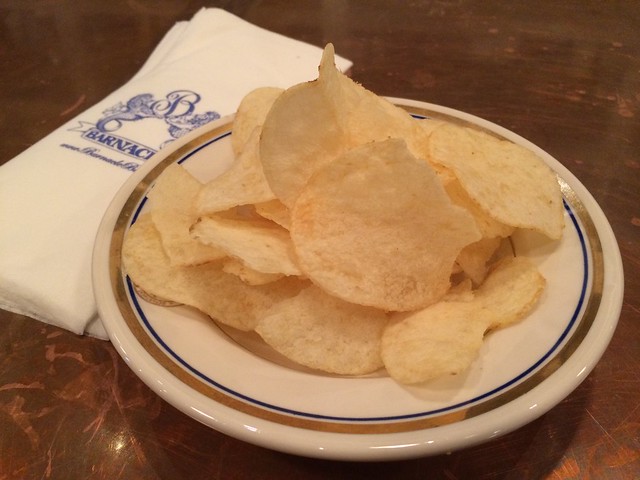 Boy, was this good! I’ve only previously had beef tongue sliced into sandwiches, shredded into tacos, or cut up in different ways as an ingredient in soups and stews. This was large pieces of tongue, perfectly cooked and beautifully dressed, simply presented so as to enjoy the beef tongue in all its delicious glory. Great job, Namu Gaji!

Mmm, this was heaven on a plate for a meat-lover like me! I think the smoked beef tongue was my favorite! It was SO tender and had a great texture and flavor, noms! The trotter croquettes were also really fun. I wish the pic would’ve come out better since this dish was so yummy.

There’s usually an occasion to warrant a work dinner for our group, but this time around I think we just wanted to grab some Korean BBQ in Japantown. What?! We don’t have a Korea-town in San Francisco, hehe. I’d never been to this restaurant, but it’s one of those places that’s all-you-can-eat for a set price. Or at least all-you-can-eat when the service feels like refilling your table. I’m not complaining, we had plenty to eat as you will see. Overall, I enjoyed the food and it’s always fun to hang out with my work peeps and their significant others. There were only six of us that night which made it easy to pass along food as they were ready off the central grill (and split the bill, lol)! $23.99 each, beer additional
YakiniQ BBQ, San Francisco CA

The grill is located in the center of the table and it does get dirty throughout the night, but they periodically replace the grill top. At one point, we had too much meat in the center which choked out the flame, so a server had to relight it. Oops! I tried to get a pic of everything we ordered, and I was mostly successful. We kept ordering multiple plates at once so it was a little difficult. You’ll get the general idea of the evening’s dining experience though, hehe!

Prime beef tongue on the grill.

Small intestine. You definitely have to use the scissors to cut this and cook it to a crisp!

Honeycomb tripe. Not my favorite, but they taste better with some chili sauce on top.

Pork skin. Again, the trick is to grill this to a crisp otherwise there’s no way you can even chew through it!

Hite beer in a Cass glass beer glass. It was my first time trying this beer and I enjoyed it. It was light and didn’t make me burp as much as other beers, lol!

It’s a real mouthful! We serve it on deli rye bread with lettuce and tomato. A great combination. Served with cole slaw. $14.45
Sherman’s Deli and Bakery, Palm Springs CA

Wow, this sandwich was a true MONSTER! It was really two sandwiches stacked up into one. The meats were SO delciious and the rye bread was light and fluffy. I love Sherman’s!

Classic white Ford Thunderbird. I think they switched out the original hood emblem, but I really don’t know anything about cars, lol!

I had to work in Oakland in the morning today so I stopped by one of the Mexican food trucks in West Oakland for lunch. One of my co-workers suggested El Patron Lonchera because they have tasty tacos and the food hasn’t made him sick yet, lol!

These were pretty good! Both tacos had great flavor and they didn’t get me sick, hehe. The beef tongue was in large chunks (yum) and the carnitas were nicely shredded with a few crispy pieces (double yum). The guy running the food truck doesn’t speak English so you either have to gesture or try and remember your pathetic highschool Spanish grammar!  🙂

Not much going on today. Just another day of training at work, hitting the gym afterward and I have to remember to swing by Walgreens for some hairspray. Other than that, I’ll prolly just catch up on DVR. I should start thinking about what I’m going to pack for Ohio. It’s gonna be in the 40’s, EW! It’ll be fun to see Codes though. Not looking forward to all the food and drinks though so close to the cruise, bad timing.

This soup is very rich and kinda too salty! The beef tongue is fall-apart tender and so tasty as are the root vegetables, but the broth is super soy flavored, smoky, and salty. I’m not sure where the tendon terrine is in there. I would imagine that a tendon terrine with just melt in such a hot soup.

It felt good to be back at the gym this morning. It’s Thursday and I really want it to be Friday! At least the weather is getting nicer. Hopefully it’ll be great for the weekend. Gotta plan dinner with the boys on Saturday. Papa Chang also recommend some Asian restaurants down in San Jose for Sunday – can’t wait!

This was delicious! I love the dark, rich flavor of beef tongue. It was super tender, juicy, and fatty – just the way I like it! They also pile on the meat and top it off with yummy toppings. Messy, but amazing!