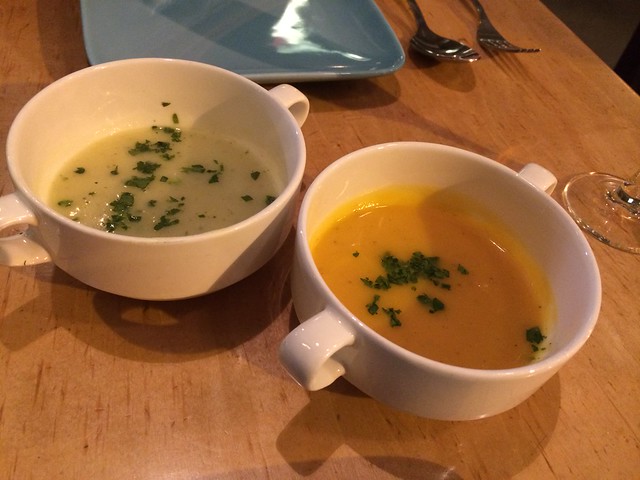 The artichoke soup was really delicious, and nice and warm. The butternut squash soup on the other hand was cold and not very appetizing because of it. Thank goodness there were two to choose from. 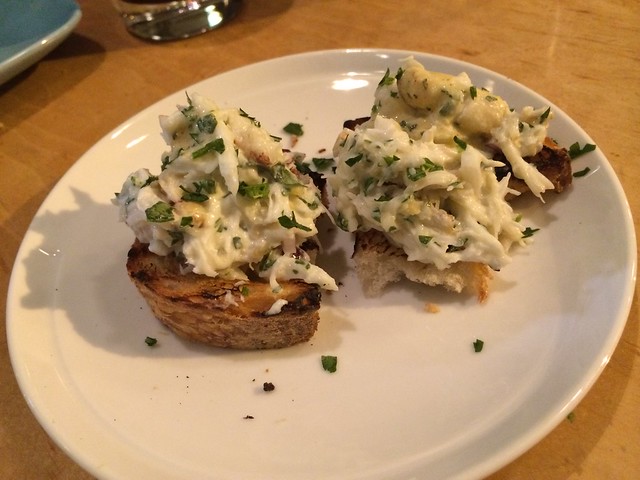 Crab salad crostini. Complimentary
These were delicious little bites compliments of the chef. I liked that it was made with real crab and not imitation. 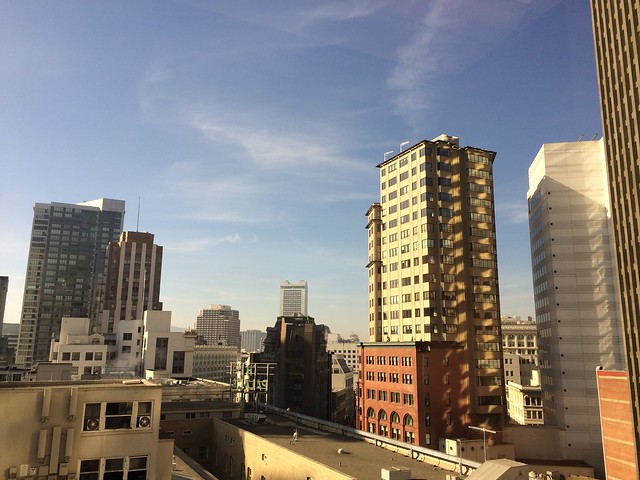 Downtown view from my office.

I didn’t know what a valdostana was, but it looked good and hearty in the display case so I thought I’d give it a try. Apparently, valdostana refers to a region in Italy and what I ordered was a torta valdostana. It was very tasty and rich. The inner layers of dough seemed a bit undercooked though. Maybe there was just too much butter in the dough. Look at me complaining about overly buttery crust, lol!

This place is FAMOUS for their cream of artichoke soup! They’ve received many awards and national recognition including a James Beard Foundation Award. When I found out that we were going to be traveling nearby, I had to include a stop-over to try their food.

There have been mixed reviews online regarding the artichoke soup, so I’m gonna throw my hat into the ring and say that I really liked the soup! It had a great texture and a nice natural artichoke flavor. They use sour cream and corn starch to thicken the soup instead of cream. They use bread from Half Moon Bay Bakery and it was delicious. The bread was reheated before serving so it was nice and warm and fluffy. NOMS!

Mmm, I love artichokes! This dish was very tasty and the bacon herbed bread crumbs were fabulous. It took a while to eat through all the leaves, but we enjoyed savoring each one!

This was delicious! The tuna was beautiful and the vegetables were perfectly cooked too. I’ve never had muhammara before, but this condiment was SO tasty! I guess it’s traditionally made from aleppo peppers, ground walnuts, breadcrumbs, and olive oil and can have additional ingredients. Noms!

Antique wall fixture, US Customhouse, Battery Street. Not really sure what this was used for, hehe.

This sandwich was ok. The bread was dry and hard, but I liked the oozy gooey melted provolone cheese. The prosciutto was also extra salty for some reason. And forget about the service – it’s SUPER slow! If you’re in any hurry, avoid this place with your life!

Simple, delicious! The lemon aioli was a wonderfully falvored, light accompaniment. I love artichokes even though they’re a lot of work to prepare and eat. I guess that’s why I tend to order them out, not cook them myself. Hehe!

Sunrise from my balcony with a view of downtown. Ahh!

The batter they used had a very good flavor, but I was disappointed that the whole this was SO salty. I love fried things, but this was also a little greasy. Kinda sad about that.

Had a busy day-before-my-birthday day! Woke up with my lovey, stayed in bed and randomly caught a Streetfighter movie on TV (Legend of Chun Li or something like that, lol), went to the gym, got my hair did, had lunch downtown, picked up my wool and seersucker blazers from the tailor, did computer stuff, then had an AMAZING birthday dinner at Benu!

The dinner had 17 courses and lasted 3.5 hours! That’s pretty good if you ask me. I once had a pre fixe dinner in the Jewel Box at Mistral Kitchen in Seattle that lasted almost 4 hours, too. I honestly LOVE long dinners. They’re super relaxing and the food is almost always spectacular at these nice establishments. I thoroughly enjoyed this year’s birthday dinner. The food was SO delicious and the service was impeccable. (Anybody want to hit up French Laundry next?)

Afterward went to the Castro for some drinks but I didn’t last very long. I was SO frickin’ full and could barely move.

Can’t wait for brunch with T-Head and RSL tomorrow, then getting trashed with even more friends at Badlands!

When I saw this dish on the menu, I was very intrigued. I’ve had venison before, but never as a tartare. The deer had a surprisingly clean flavor. I expected it be very gamey, dark and tough, but it tasted pretty neutral. Most of the flavor from this dish came from the artichoke mayonnaise, walnut bread, and whatever the freeze dried crumbles were on the plate.

All the plates duirng dinner were beautiful! They were small poritons, but after 17 courses I was stuffed. The plates looked simple at a glanced but they had a lot of different components.

Walnut bread. Even the bread was fantastic!

Moet e Chandon a Epernay, Champagne, Cuvee Dom Perignon, 1993. $40 corkage
Silverfox had this bottle of champagne laying around and he decided to pop the cork for my birthday dinner, aww! That’s a good thing because Benu had bottles of Dom Perignon 1996 and 1995 for $750 and $957, respectively. Ouch! We got away with only paying corkage.

The boxed bottle of champagne is just asking to be opened!

Menu signed by chef Corey Lee. This was a cute surprise at the end of the meal. We had menus at our table the entire time to keep up with what we were eating, but those were taken away at the end and replaced with a couple signed menus.

Omg, this was SO good! Total comfort food. I loved every component of this dish. I just wish I knew what the greens were on top. The squid ink rice and chorizo made the perfect smoky base for the calamari and roasted artichokes. This dish was pretty rich so they don’t overdo it on the portion. NOMS! 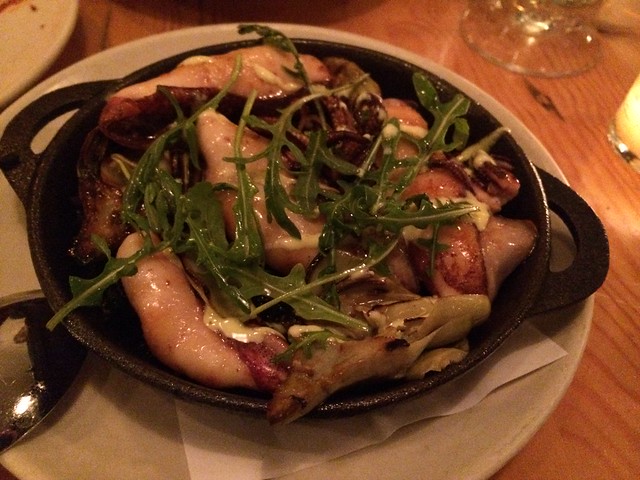 I have to admit that I was a little surprised (and impressed) at this dish. I think of Anchor Oyster Bar as serving simple, delicious food – caring more about freshness and quality than presentation. So the spinach-striped pasta was a nice surpise. It was abolutely beautiful and had a wonderful sheen to it. The ravioli was cooked perfectly and the crab meat was SO delicious. This was another special item on their menu, but I would love to see this again!