The cocktails at Percy’s and Co. are pretty frickin’ amazing! They make all their tinctures, purees, and sour mix in house so they’re not your generic mixers. The combination of flavors in each cocktail tastes great and they’re all expertly made.

We came across this busy brunch spot in the Marina because another restaurant we were planning on eating at was closed. The menu items were pretty basic and standard fare. The Denver scramble was ok. There was A LOT of it so you definitely got your money’s worth. The potatoes were delicious though and I couldn’t stop eating them! They were soft and tender and super flavorful. The service, on the other hand, was sporadic, confused and difficult to flag down.

Mimosas with orange juice and grapefruit juice. Each $9

Omg, our waitress was a bit wild and crazy, but very entertaining! She was definitely working hard for her tip which I can appreciate. This cocktail was more mellow than I expected (a good thing) and very refreshing. Mmm…

Yummy mimosas lead to a happy me! I’m kinda annoyed that they charge fifty cents extra for the grapefuit juice though especially since it isn’t listed on their menu.

No Cell Phone sign at the Plow counter. Oops, I still used my to snap food pics! 😉

The Lookout is a pretty decent drinking hangout on a sunny weekend day. Hi Tops down the street can get super packed so Lookout a more relaxed and chill. 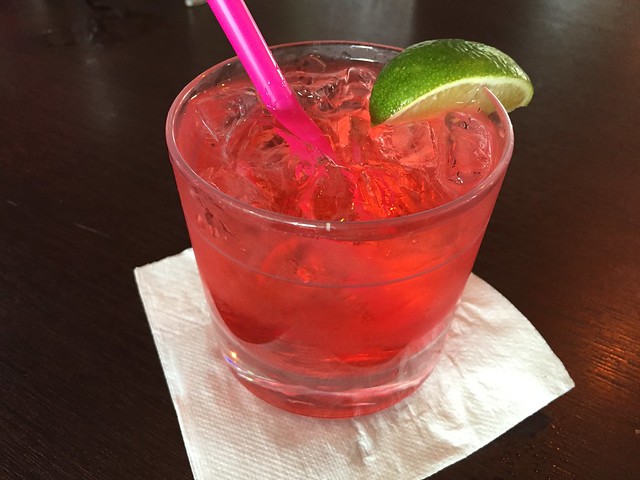 This cocktail was really refreshing! It had a beautiful color and definitely evoked a place with a warmer climate where Hemmingway might have traveled. If it was a little less sweet, I would have love it even more.

Window display at IXIA, Market Street. IXIA has the best floral sculptures. This dress is made completely of plant material!

There’s nothing better than a well-made breakfast cocktail! This had great flavor and was bright and sparkly to ease you into the morning.

Tree shadows on orange wall, Edison Elementary School. I was walking to the gym one morning and was struck by the beautiful colors!

Orange-pomegranate (above) and pomegranate-grapefruit (below). Huge $12 each
Mission Beach Cafe, San Francisco CA

Mmm, these things were definitely huge and gave me quite the buzz after brunch was over. Gotta love Sunday Fundays!

16th Street Bart Station, The Mission. I love the colorful Hispanic style decorations on the fences along the station.

This cocktail was delicious – a great combination of whiskey, fruit, and spice! It was a warm day outside so it was nice to have this yummy drink to relax with in the shade.

Mission Bowling Club entrance. I’d never been here before and completely missed it walking by across the street. The front patio area is gated so the bowling alley is difficult to see if you’re not paying attention.

Another yummy set of beautiful cocktails. The service at Waterfront Cafe was very friendly and perfectly situated along the inlet near the Chamberlain Bridge.

Random elephant ride at the Highland Adventure Weather Station in the middle of the island. It was probably defunct, but I like the weathered look of it. We had taken a taxi tour around the island with a hilariously outspoken driver named Angela. We learned that she doesn’t eat rabbit because a skinned rabbit looks like a human baby, and she doesn’t eat shark because she had recently witnessed a butchered shark with a human hand in its belly. Lol!