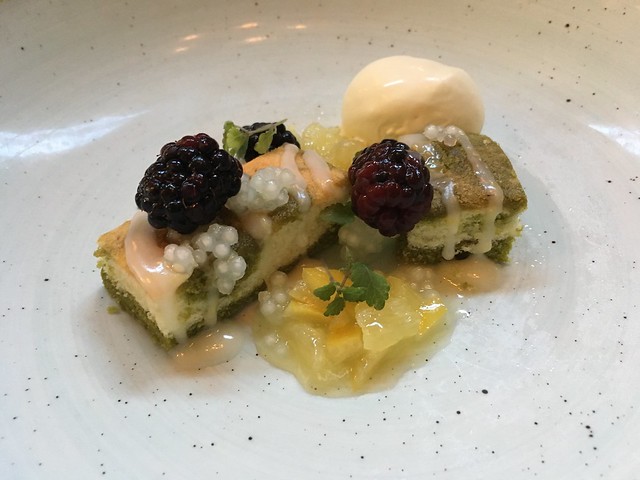 This matcha cake was really good. I liked that this dessert wasn’t too sweet, but there were plenty of different textures and flavors to make it interesting. Yum!

This dessert was very tasty and I liked that it wasn’t super sweet. The warm cheese arepa was delicious and slightly savory which was a great contrast to the sweet berries and ice cream. I also loved the colors on the plate.

Oooo, I was excited to visit Town Hall for the first time since living in SF. I can’t believe I’d never been here before. These cocktails were pretty tasty. The Haze on Howard was refreshing and bright, while the Vieux Carre was on the stronger, harder side. The first time I had a Vieux Carre was at Jardiniere and since I’m totally loving whiskies these days, this is becoming a favorite of mine.

This was ok, but the soda was flat! It took forever to make it to our table too. I swear this place must have gotten new management because the service and food has gone to sh!t.

“Do not sit on steps” residential signage, Noe Valley. San Franciscans hate it when you sit on their stoop.

I like the idea of this cocktail, but it was a bit too sour for me. If they had used sweet, naturally ripe blackberries, I bet this would have kicked ass!

We were walking in the Mission one night on our way to a comedy show and spotted this random car decorated and covered all in Barbie dolls. Everyone was checking it out and I couldn’t help but snap a couple pics with my iPhone.

Because the lights had gone out in the restaurant midway through dinner, the place was pretty dark by the end of our meal so a co-worker offered his cell phone light so I could take a photo of dessert, lol! Take my word that there is a blackberry sauce underneath that’s obscured by the shadow. The cheesecake was ok, but was more crumbly than I like. Three course dinner $30
17 North Roadside Kitchen, Mount Pleasant SC

Beach on Sullivan’s Island. I know you can’t tell from the pic, but there were actually quite a few people out on the beach enjoying the weather that day.

Mmm, this was a very tasty dish! The pork cheeks were super tender and flavorful and I enjoyed all the different components on the plate. The sweet blackberry jus tasted great with the hearty protein, and the pecans added some crunch against the creamy polenta. I also loved the presentation!

Strings of lights, Mad River Bar. Perhaps I had too much to drink and my vision had become blurry, hehe! 🙂

Firepit at The Lodge at Sonoma. After dinner, we hung outside at the hotel and relaxed next to the firepit before turning in.

This scone looks dry, but it actually wasn’t. It was pretty moist and the blackberries gave it a nice sweetness and flavor. We pruchased this scone thinking it was on the healthier side, but I’m not entirely sure that it was healthy at all, hehe! $2.19
Tully’s Coffee, San Francisco

It says “reduce-fat” and it certainly tastes like. I was super starving the morning that I bought this (along with the mini vanilla bean scone) and neither item really satisfied me. Pretty to look at but not much flavor.

After leaving the gym, I started thinking about the late birthday party on Saturday that I’m having over at my place for some friends at work. I really don’t have anything for it yet and my apartment is a MESS! I thought that this would be less stressful than having dinner at a restaurant since everyone hates splitting the bill and there’s still someone who keeps underpaying (argh!).

I stopped by Noe Valley Bakery again because I initially thought I was going to get a bunch of their amazing cupcakes for the party, but they’re kind of expensive and my wallet is feeling overused lately. I checked out their book of cakes and thought I wanted one of them, but I’ve since decided that maybe I’ll just swing by Tartine Bakery on Saturday morning and grab whatever looks good. You can’t really go wrong with something from Tartine and I think pre-ordering something would just cause more stress and I don’t have the time.

Papa Chang and Rapunzel said that I shouldn’t worry about and just provide simple things like chips and other random snacks, but I always have to have food for guests – it’s the Filipino in me! Maybe I’ll stick to my original plan and have some Filipino food (lumpia and pancit), but just not order too much. Maybe people will bring food too. I just can’t spend too much money since I’m saving for all those trip’s coming up. I’ve also decided that I’m visiting Codes in Ohio for his 30th bday so that’s another unforeseen expense. It’ll be fun though and it’s always great seeing him.

Just made plans to have brunch with B2 on Sunday. She wants to take me out for a late birthday meal and to hear all about my Benu dinner. She loves food as much as I do so we’ll have a great time.

This tartlet beckoned to me from the counter display. The berries looks so sweet and luscious, especially with the apricot(?) glaze on top. It was very tasty ! The pastry shell could have been a little thinner but I really can’t complain too much about this scrumptious tart.