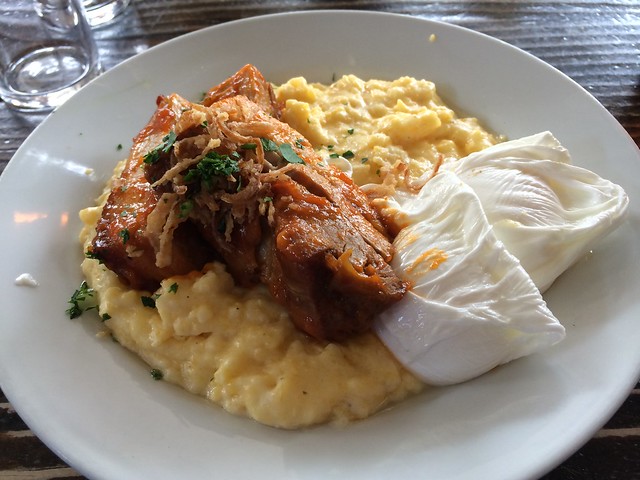 Gross! This was probably the most bland dish I’ve ever eaten that had pork belly and/or grits in it; and I’ve eaten a lot of dishes! I ate half of it because I was starving, then couldn’t eat any more of the crap. The service was also atrocious! The seater tried to make a joke but ended up just being offensive. I didn’t get water until halfway through the meal, and the server was completely clueless about everything whenever she decided to make a rare appearance. I don’t think I have any reason to return to this restaurant. 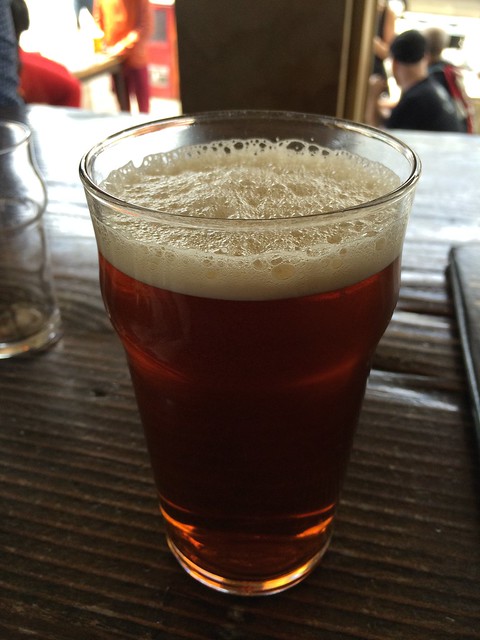 I’ll admit that I had NO idea what a scrapple was when I order it. I think it was the bacon jam that called to me. I quickly Googled it on my phone and found this on Wikipedia:

“Scrapple, also known by the Pennsylvania Dutch name pon haus, is traditionally a mush of pork scraps and trimmings combined with cornmeal and flour, often buckwheat flour, and spices. The mush is formed into a semi-solid congealed loaf, and slices of the scrapple are then panfried before serving. Etc.”

Sounds super healthy, right!? LOL. So after munching down the bacon-wrapped and cheese-filled dates, this isn’t exactly what I wanted to eat, but DAMN it was tasty. In addition to the Wikipedia description, this scrapple looked to be breaded before being pan fried.

The bacon jam was frickin’ amazing and once you broke the poached eggs and ate everything together, it was pork lover’s heaven!  Don’t think my arteries could handle another round of this, though, hehe!

These bites were very flavorful and heart-stopping! No really, I could feel my arteries getting clogged and my heart stop for a second, lol! Like that’s stopped me before. 🙂  These were delicious and the beer gastrique provided additional sweetness. I did eat the bed of lettuce leaves to balance out all the fat, lol!

I’ve said it before – I’m not a big beer drinker but I’ve been getting lucky with my choices lately! This dark, caramelly Belgian style beer was absolutely delicious! Really great, rich flavor and I loved the cute etched glass that it came in. Helps me to forgive the place for having a Kalifornia Kolsch. Don’t they know that only beer brewed in Cologne (Koln) can be called Kolsch!?